Realm Keeper is a movie made by Inferno999.

Cryb lives in the Life Realm, where animals run free and plants grow everywhere. But when he discovers a secret entrance to the Fire Realm, home of the evil Tilonem. When Mesola and the elders find out, they banish Cryb and his family from the Life Realm. Cryb finds out that he's a Realm Keeper, master of the Life Realm, and must join forces with the Realm Keepers of other realms to unite the realms together, and defeat Tilonem and the rest of the Fire Realms. 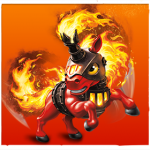